Note: Check out the latest news on this topic.

Over the last few weeks you've probably heard about how volatile swings in the share price of Gamestop have been driven by vengeful internet sleuths from Reddit and wealth inequality activists; you've probably also heard how dangerous it would be to invest in GME and why other long term positions in silver are a better investment opportunity. Today I'd like to explain to you why everything you've read or seen was a lie and how the wealthiest 1% are trying to protect themselves by manipulating the media and the stock market.

I do admit, it probably sounds like a conspiracy theory; but then it would, because we are currently experiencing what is known in investing as a 'Short & Distort'.[1]

Short and distort (S&D) refers to an unethical and illegal practice that involves shorting a stock and then spreading rumours in an attempt to drive down its price. S&D traders manipulate stock prices conducting smear campaigns, often online, to drive down the price of the targeted stock.

In order to understand the context of what is currently going on, it's important to understand the fundamental basics of how the stock market functions. An investor looking to invest in a company, believes the stock price will increase over time, so they go 'long' in the stock, investing capital now with the aim that it will be worth more in the future. For a whole range of reasons which I won't explain in too much detail (such as facilitating market liquidity, keeping inflation in check etc), investors are also able to go 'short' on a stock. This works in a similar way to going 'long', but it carries a fundamentally infinite amount of risk.

Going short involves borrowing the stock with the belief that it will decrease in value by a set future date—the expiration date. The investor sells these borrowed shares to buyers willing to pay the market price and before the borrowed shares must be returned, the trader is betting that the price will continue to decline and they can purchase them at a lower cost - thus pocketing the difference.

The risk of loss on a short sale is theoretically unlimited since the price of any asset can climb to infinity.[2] This is the key part of the current situation with Gamestop which we will return to later. For now though it's important to understand who the players are in the fight over Gamestop and what this means in respect to the information you're reading about the stock price through media outlets.

Short positions in GME are largely made up of hedge funds such as the American company 'Melvin Capital', who throughout 2019 and into 2020 continued to load up on short positions, citing that Gamestop's fundamental bricks and mortar business was overvalued and that it would likely fall into administration in the near future. Long positions in GME are for the most part, now made up from retail investors, free market investors (semi-professional traders with no affiliation to any institutions) and other hedge funds or capital management firms seeking to capitalise on the current volatility in the stock price.

This has created a dynamic where long positions are pushing the price of the stock upwards, further worsening the position of short sellers such as 'Melvin Capital' and other hedge funds, whose positions get worse for every cent that the price increases. In late January 2021, enough long positions had been taken in GME that it triggered what is known as a 'short squeeze'. A short squeeze happens when investors purchase a stock which has already been significantly shorted; buying the stock back becomes increasingly more expensive as long investors invest more and shorts buy the stock back to cover the shares they previously borrowed.

Whilst the figure is widely disputed and is considered to be much higher, raw Ortex data shows that the short interest on GME on December 31st 2020 reached 157.66% of the float[3], which means that GME had been shorted beyond 100% of it's shares. As their loss is theoretically infinite, during a short squeeze investors with short positions scramble to cover their losses sending the price into the stratosphere. The last time a short-squeeze of market shaking magnitude occurred was in 2008, when over-exposed short positions caused a short squeeze on VW's stock price, rocketing the price to a peak of more than €1000 ($1500) per share.[4]

With Gamestop there is one big difference, this time around the market makers, clearing houses and brokers saw it coming and shut down the game, illegally prohibiting access to the supposedly free market[5] at a vital moment. During the spike brokers such as the American company Robinhood, UK based Trading212 and several others restricted buying of GME, whilst continuing to allow retail investors to sell the stock, a move many have rightly flagged as market manipulation and the first in a string of nefarious tactics that some of the world's largest financial institutions have been engaged in over recent weeks.

Graph depicting the effect of disabling the buy option for retail investors. 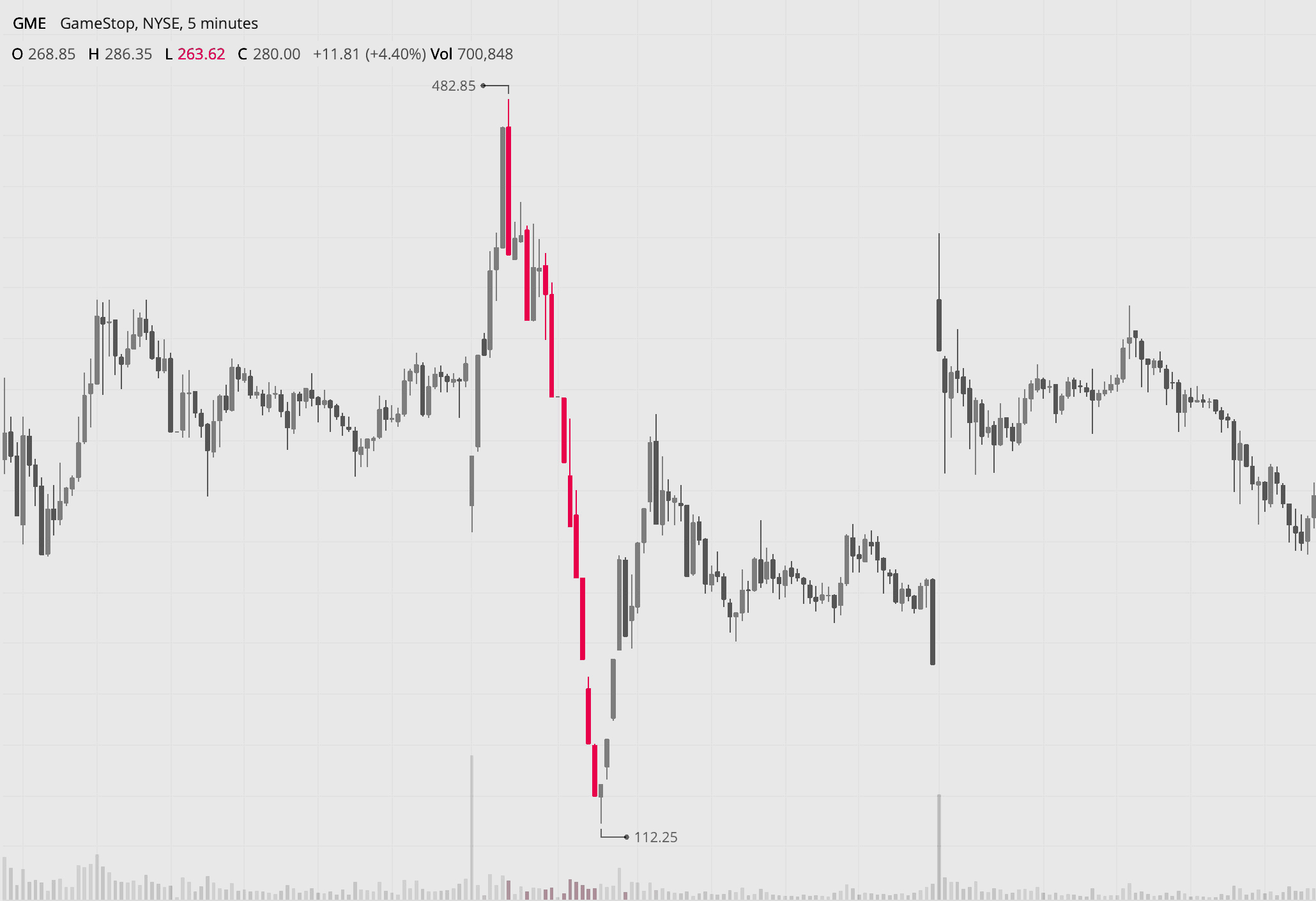 Following this instance of market manipulation (just one of many instances during the course of GME's volatility), the 'House Committee on Financial Services' questioned several of the key players for their involvement - leading to 'Melvin Capital' CEO Gabriel Plotkin, stating that 'Melvin Capital had covered their short positions' and that he believed that 'most shorts have had ample time to cover their positions'.[6]

Around this time, media outlets across the world began reporting on how Gamestop's stock price was dangerously volatile, causing people to risk money they can't afford to lose and that silver was a better investment opportunity. Many informed retail traders found it suspicious, that the US' main market maker 'Citadel', whose CEO Kenneth Griffin was questioned during the hearing by the HCFS[7], has a substantial long position in silver.

Over the following few days, media outlets spammed $SLV, citing that "Reddit's flashmob won't be able to work its GameStop magic on silver".[8] It would have taken a diligent reporter less than 5 minutes to check the subreddits which were supposedly targeting silver to see that the only mentions of it, were users mocking the media for quite literally fabricating the story from thin air. Retail investors using Reddit's forums are not some collusionary group of misfits or outlaws engaging in collaborative stock manipulation, they are just regular people who like to trade.

In the weeks following the initial spike the stock price followed an unnatural trend downwards and then sideways at ~$50, during this time news outlets continued to perpetuate the mantra that GME is a bad investment[9] and that retail investors don't know what they are doing. This is where the distortion and shorting of the stock really begins to get out of control. Allegations that retail investors had engaged in targeted stock manipulation and that social media bots encouraged people to buy the stock are falsified[10] and the only evidence of bot activity on platforms such as Reddit, points towards those who have short positions in the stock, with comments attempting to deter people from buying and holding the stock.[11]

The toothless American regulator - the SEC, whose job it is to regulate financial markets[12] - has allowed hedge funds to be 'self-regulating' for several years following the 2008 financial crisis and whilst they have pledged to protect the retail investors and the market as a whole from market manipulation which they publically acknowledged as recently as January 2021[13], they have done nothing to enforce meaningful legislation in the American financial markets.

Citadel and other institutions regularly pay fines of a few million dollars for criminal violations relating to billions of dollars of market capital.

via Bloomberg, SEC, The OTC Space

As recently as Wednesday 24th February, GME was trending sideways at ~$40, before the price tripled, closing the regular trading day at $90 and going on to close after market trading at $121. Many investors have speculated that this is evidence that short positions haven't been closed, or worse still, that original short positions were closed and then replaced with new, far larger short positions, threatening the stability of the world's financial markets simply because the 1% don't want to admit that they lost at their own game.

Several of the largest media outlets, including those dedicated to financial news and information such as CNBC, The Guardian, The Independent and the Financial Times have all reported false information over recent weeks, presenting wild conjecture as fact[14] in an attempt to further deter retail investors from investing in Gamestop and to capitalise on the click-bait hysteria surrounding the company. Several media companies began reporting in early March on a sudden increase in investment returns of 20% for Melvin Capital[15] - without being able to reference a reliable source - which is indicative of many previous PR campaigns run by large companies, in order to boost their public image.

A toxic combination of sensationalism, irresponsible reporting and backroom deals is allowing false information to spread like wildfire and depicting nothing but falsehoods surrounding Gamestop and the current state of play, which is that those who have shorted the stock are placing our financial markets at risk because they made one unscrupulous play too many. Shorts have placed significant, downwards, artificial pressure on GME, attempting to bankrupt a company and place 15,000 people out of work during a pandemic, by shorting more shares than were actually available to trade.

When this story comes to light and all is said and done, it's important to remember that the hedge fund managers, US regulators and media outlets are the ones who are responsible for the mess that's left behind and that the media stooges, such as Jim Cramer (CNBC) - who in this 2006 interview[16] explains how hedge funds use illegal tactics to manipulate the market - are the puppets that feed us with false information at the behest of their puppet masters.

A list of media outlets who are guilty of deliberate, incompetent and/or biased reporting relating to GME:

Do not believe anything you read in the media.